The English soldiers on the continent were not a fully equipped English army. Clothing was supplied by either the Regimental or Companie commander. Clothing varied and troops would wear essentially, whatever they could obtain. The only note that can be found in the archives says that English troops when they landed in Holland predominantly wore red.

The outfit of a soldier, apart from his arms and armour, consisted of a Fustian Doublet , a Cassock or Cloak for the winter, a pair of Venetian hose, two shirts and two bands ,
three pairs of woollen stockings , and four pairs of boots. 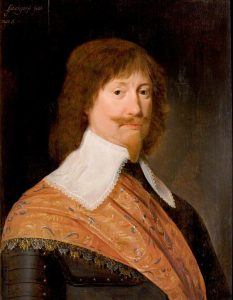 Sir Nicholas Byron was born in 1596 at Newstead Abbey in Nottinghamshire. By the late 1630s he was Captain of a Companie of Foote in the regiment of English volunteers fighting against the Habsburgs in the Netherlands and was present at the Siege of Grolle. When the English Civil Wars began, Byron was immediately put at the centre of the King’s military organisation and in 1643 he was made Colonel-General of Cheshire. In March 1648, his home, Gaynes Park in Essex was sequestered by the parliamentarians and he died later that year.